SEATTLE is a fast combat support ship designed to supply the ships of the attack carrier strike force with fuel oil, aircraft fuel, ordnance, frozen and fresh food, and Fleet freight at a rapid rate of transfer, using conventional con-rep rigs and CH-46A helicopters for vertical replenishment.  She was constructed at the Puget Sound Naval Shipyard, Bremerton, Washington.

Shortly after commissioning in April 1969, SEATTLE sailed via the Panama Canal to her home port in Norfolk, Va.  SEATTLE deployed to the Mediterranean Sea thirteen times and had been involved in numerous Atlantic Fleet Operations.  She was named “King of the MED” for her super service and reliability.  SEATTLE finished her second major overhaul in the old Brooklyn Naval shipyard in November 1980. She completed over 5500 UNREPS before being decommissioned in March 2005.  In other words, SEATTLE “CAN DO.”

The idea of taking supplies to ships at sea and handling them across the water was new to the Navy at the turn of the century.  Sailing ships had been able to stay where the action was for weeks or months; sea breezes provide the power, sailor’s diets were less complex, and round shot was more easily stocked than bombs and missiles.

Then came the day of the steamship with its huge appetite for coal, the large men-of-war burned 50 tons of coal a day, and to keep their bunkers full, had to return to port every 10 days or so to re-coal.

The Navy learned a lesson in 1898 during the Spanish-American War.  The Spanish Fleet was blockaded in the Harbor of Santiago, Cuba.  When the Spanish made a run for the open sea, three of our ships (including the old battleship MASSACHUSETTS) were 45 miles away being re-coaled at Guantanamo.

The need for on-station at-sea refueling was obvious.  Early efforts to solve the problem led to the development of a high-line for carrying bags of coal from a coaler to a warship, one in the wake of the other.

World War One saw the beginning of the Navy’s conversion to oil-burning ships, and soon the coalers were out of business.

It took the pressure of the Second World War in the Pacific, which reached into the far corners of the ocean, to make Underway Replenishment (UNREP) a regular feature of Naval Operations.  The war in the Pacific made new demands on the Navy; we had fighting ships and men, but our new mobility meant that supply lines had to extended, quickly, in order to project out power across the oceans and keep it there.

The Navy has come a long way since those days.  SEATTLE was the third and largest of her class and is nearly twice the size of her older cousins.  She carries more fuel than any oiler, more ammunition, ship’s groceries and clothing, office supplies and hardware, too.  SEATTLE is a virtual “…sea-going shopping center.”

“For want of a nail, the war was lost,” said Ben Franklin.  The job and mission of SEATTLE is to make sure the Fleet does not “…suffer by even a single case of ammunition.”

As the Navy adds nuclear ships to its Fleet, it will slowly outgrow its thirst for black oil.  But carrier jets will still need jet fuel and have big appetite.  Also, Navy men will never outgrow their need for fresh vegetables and meat, and mail from home.

Wherever in the world they stand their duty, the Fleet that can deliver anything, anywhere, we will find them.  From:   ”Beans, Bullets and Black Oil” 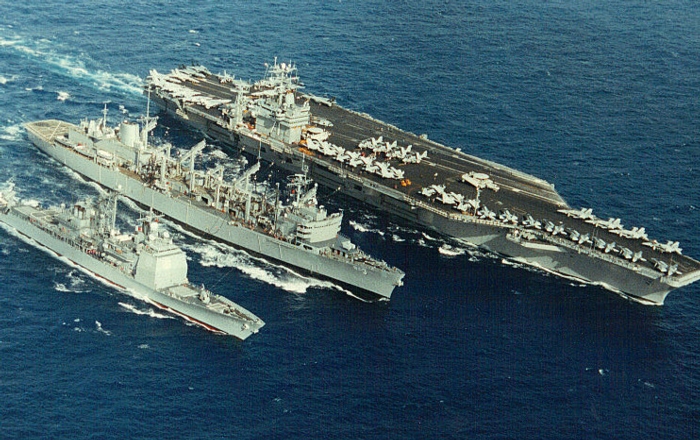