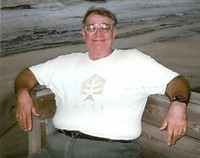 Robert L. “Bob” Gerber, a loving & caring husband, father, grandfather, son and friend, age 60, passed away Sunday, September 4, 2011, at Wake Forest Baptist Medical Center. Bob was born December 9, 1950 in Davidson County, TN, to the late Elwood George and Elsie Horn Gerber. He retired from the US Navy in 1990 after 20 years of service. He also worked with Wake Forest Baptist Medical Center for 22 years as a Bio Medical Engineer Technician. Bob was a member of Griffith Baptist Church where he served as a deacon and sang in the choir. He served as a Gideon and was a dedicated volunteer with WSFC Schools, Habit for Humanity, Special Olympics and the United Way.

Surviving are his wife, Carolyn, of the home; one son, Robert; one daughter, Traci; three grandchildren, Johnathan, George and Kari; a sister, Pat; and a brother, Jim.